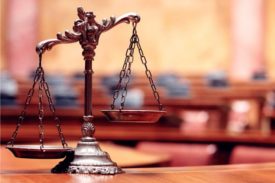 Today, 30 July 2018, the Pretoria High Court set aside a decision made by South Africa’s Minister of International Relations and Cooperation to recognise and confer immunity on Dr Grace Mugabe, wife of the former president of Zimbabwe, following assault charges brought against her by Ms Engels, one of three young women assaulted by Dr Mugabe in a hotel room during Dr Mugabe’s visit to South Africa.

This decision is welcomed by the Legal Resources Centre, who represented the Commission for Gender Equality as an amicus curiae.

The Court found that the Minister’s decision to confer immunity on Dr Mugabe was inconsistent with the Constitution.

The case was brought by the Democratic Alliance and three amici curiae, including the Commission for Gender Equality (CGE), represented by the LRC, made submissions to the Court.

The CGE argued that the conferment of immunity violated Section 7(2) of the Constitution, which obliges the State to respect, protect, promote, and fulfil the rights in the Bill of Rights and, when interpreted in light of international law, obliges the State to take reasonable steps to protect women from violence.

The CGE further argued that Ms Engels, as a woman, forms part of a vulnerable group of society. The State ought not to be protecting someone who has been accused of violating and abusing a woman. Furthermore, South Africa, having assumed multiple direct international obligations to ensure justice for victims of gender violence, is obliged by international law to ensure that victims like Ms Engels have access to effective remedies, and that alleged perpetrators like Dr Mugabe are investigated and prosecuted.

The High Court had to consider two questions: whether Dr Mugabe enjoyed immunity that required recognition and whether the Minister could confer immunity to Dr Mugabe due to her status as a spouse of a head of state.

The Court found that there is no customary international law basis to grant immunity to Dr Mugabe based on her status as the wife of the former president of Zimbabwe (president at the time of the alleged assault).

Further, the Court found that Dr Mugabe is not immune from the jurisdictions of our courts and the Minister’s decision to recognise or confer immunity upon her was unconstitutional and unlawful. The Minister’s Notice was set aside so that our courts’ power to administer justice in the matter is not constrained by any procedural bar.

The court also awarded costs of one counsel for each of the amici curiae.

The LRC welcomes this judgment as a vindication of our Constitutional commitment to protecting women against violence. The judgment demonstrates that the law may not be manipulated in the interests of the politically powerful and that the decisions of government functionaries must be accounted for.

Sharita Samuel was attorney on brief and Michael Bishop was counsel